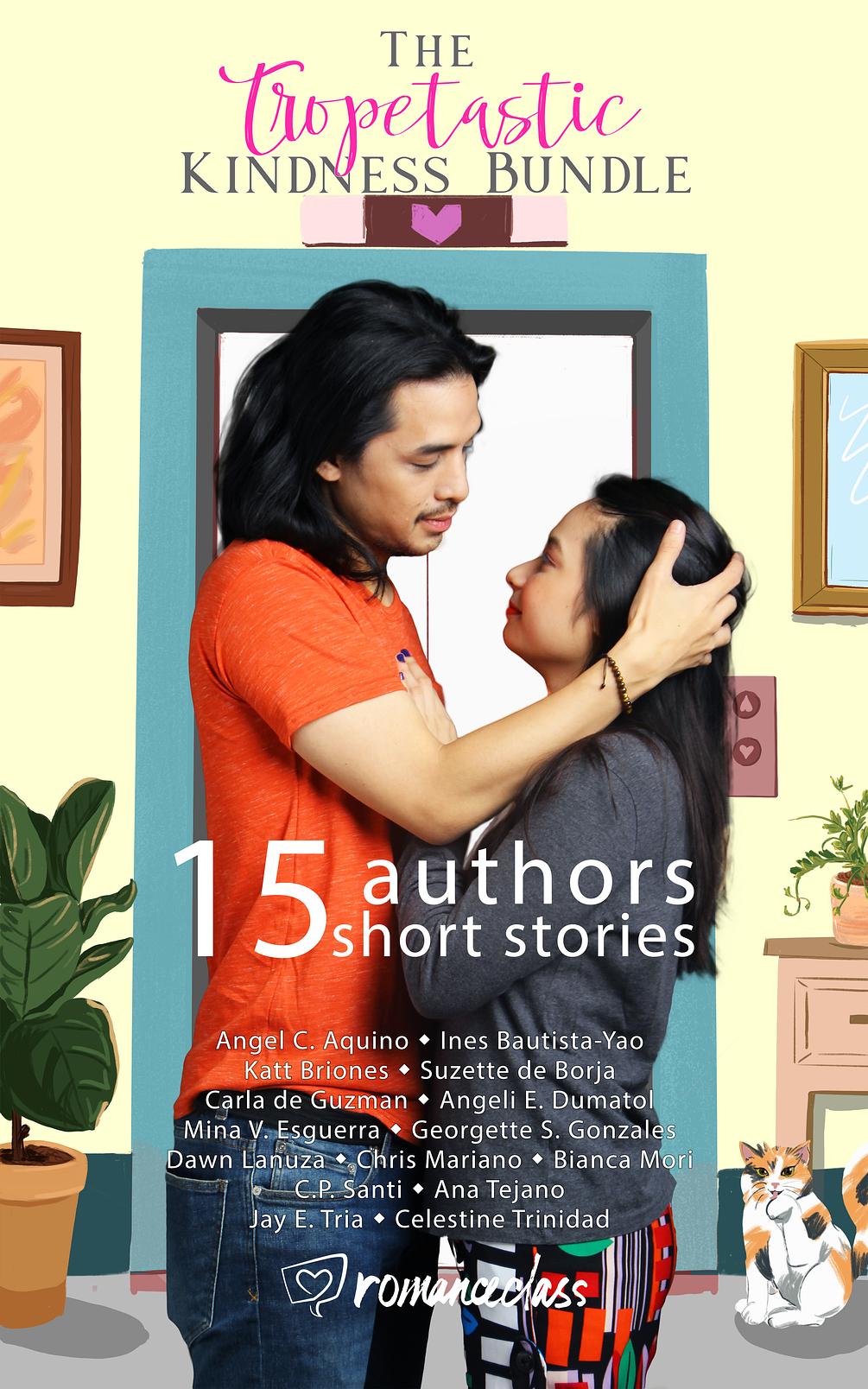 #RomanceClass is a community of Filipino authors of romance in English. This anthology features all-new romance short stories from 15 #RomanceClass authors. Each author was assigned a trope and a shared setting (the fictional St. Tropez Court condominium in Ortigas, Metro Manila).

All proceeds will be donated to charity*. If you've purchased this anthology, you will receive an update on the donation in your email through Gumroad. (Update: Based on the early response, we've decided to include more orgs as beneficiaries. We will be supporting Project Propel, Gantala Press, and Rock Ed Philippines.)

Because their brother has Valentine’s Day plans, Chili and her sister leave their house and escape to their family condo — only to come face to face with family friend Lucas, who happens to be Chili’s childhood arch nemesis.

As a favor to her sister (producer of cable dating show A Pleasure To Meet You), Natasha agrees to appear on an episode and discovers she's going on a date with the creator of her favorite amateur pottery channel on YouTube.

News anchor Cherry Ronillo is fiercely independent and takes pride in doing things on her own, whether it’s at work or in her relationships. But when her ex-boyfriend and stalker Saul suddenly appears, she realizes there are some things she can’t deal with by herself. Her colleague Raffy is more than willing to lend a hand, but can she learn to trust him and ask for the help that she needs?

Jane is an ultra-competitive woman who enjoys her mornings alone at the condo gym. When hunky Kiko proposes a wager for first dibs, an escalating betting war between two bantering neighbors turns sweet...and sexy.

As the Innovations Manager for the KiligFinder app, Cami knows that the data can't lie--and according to the data, she and her roommate, friend and one time ballroom dance partner Zack are in love. She can't avoid him forever, especially not when they both get stuck in the building elevator.

6. Noted by Dawn Lanuza (there's only one bed, heat level 0)

Hardworking and dedicated to her job, Grace is used to working long hours, and spending whatever spare time she had alone. After a week of pulling all-nighters, she found her studio apartment suddenly being occupied by her brother’s friend. And so she devised a plan with her pen and a couple of neon green Post-Its, to make the unwanted visitor go away. Will she come home to an empty apartment, or will she discover something that she may be missing out on all along?

Alma isn’t into relationships. But that doesn’t mean she isn’t into having fun. When her chance one-night stand with Kenneth gets a repeat performance, is it fate’s way of telling her to reconsider her stance on relationships?

8. Be With Me by Suzette de Borja (locked out of apartment, heat level 0)

Emergency room doctors are not supposed to lose their calm, but after a staggering disappointment at work and finding out she’s left her key to her place at the hospital, Nina loses it in the condo corridor. Sexy neighbor Sam witnesses her meltdown and offers refuge. She’d friend zoned Sam a week ago so accepting his offer might be a little awkward.

9. You Belong With Me by Jay E. Tria (best friend's sibling, heat level 3)

Mira’s kuya had promised she could stay the night, but the address he gave her led to his best friend Johan’s condo. Just the man she’d long had feelings for, feelings she’d taught herself not to pursue. But could it be that all this time, he felt the same way for her too?

After a three-week work trip abroad, Luigi Quirino from 11A comes home to a package that is not for him. He discovers it belongs to an annoyed Patricia Co from 11K and intends to make it up to her, if she lets him.

Neither Paula nor Juan has felt the kind of attraction they each feel toward each other from the moment they met. It would be so easy to fall in love except that as a single father, Juan’s priority will always be his son, Julian. What if they fall for Paula and she’s not ready to fall for them?

12. Then, Now, and Ever After by Celestine Trinidad (first love, heat level 0)

Aina Macaraig finds out that famous TV reporter Maki Angeles is actually her long-lost childhood friend. They meet each other again after so many years, and Maki now has a chance to fulfill a promise he once made her.

13. All This Time by Ana Tejano (secret admirer, heat level 0)

Mika Arceo is in a rut, and not even her morning encounters with her condo crush Paul has helped her get out of her creative block. When she finds a letter from a fan who calls himself C on the poster she left at the condo's bulletin board, she finds herself slowly getting unblocked. But when C stops writing to her, she finds that her secret fan had been around her all this time.

Housesitting her godmother’s condo unit is supposed to be nothing more but a relaxing staycation, but when Ira Marie unexpectedly runs into her junior high flame, Elijah, who she hasn’t seen or heard from in three years, long kept questions and feelings resurface.

15. Teacher May I by Chris Mariano (noona romance, heat level 0)

Her morning commute is a pain, so when Rico offers Berna a daily ride to work, she's not about to say no. What she doesn't expect is to navigate through the changing boundaries of her relationship with her best friend's younger brother.

See it in your library

View in Library
Sorry, this item is not available in your location.
Sold out, please go back and pick another option.
This product is not currently for sale.
4
5.0

Your purchase was successful!

We charged your card and sent you a receipt

Good news! Since you already have a Gumroad account, it's also been added to your library.